Serebral360° found a great read by Forbes – Entrepreneurs article, “This Female Founder Is Not Scared To Speak Out And Challenge The Beauty Industry.” 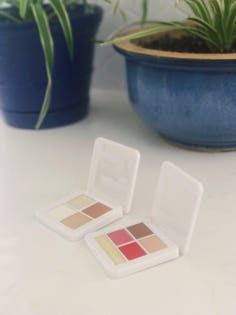 RMS Beauty founder and CEO Rose-Marie Swift has been styling the faces of supermodels and Hollywood actresses for the past three decades. In the past year, she’s been making headlines for a very different reason — her fight to bring healthier products to women across America.

“What the beauty industry is selling to women is a lie, a complete lie,” she says in a recent interview from her Charleston, South Carolina headquarters.

Swift, however, is not intimidated by the giants in the cosmetics industry. After having spent decades, consulting industry veterans on all things beauty, she decided to set up her own company — one with a very different set of morals and ethics. Unlike her counterparts who rely on water and petroleum as base ingredients for their products, Swift had a radical, but seemingly obvious, alternative in mind — natural ingredients. RMS Beauty’s line of makeup is centered around cold-pressed coconut oil sourced directly from Thailand.

Coconut oil has been a controversial beauty product that’s gained a cult-like following in the last five years. With some experts extolling the virtues of coconut oil, other health experts have dismissed it altogether, stating that it can clog pores. Swift says economics is behind these accusations: “If you’re going to use really high-quality natural ingredients like coconut oil in all your products, it’s going to cost more. Water, alcohol, these things are cheaper. So it’s about money, not health.”

That’s been Swift’s fight for the past three decades: health versus commerce. Growing up in Toronto, Canada, she fell into makeup by accident; doing up burlesque dancers in Toronto led her to gigs in Germany, Miami, and finally Hollywood. But as her client portfolio grew, she battled her own health. Surrounded by chemicals at work, Swift realized that the modern chemistry of cosmetics could be doing harm while making women more beautiful.  In her mid-30s, she turned to whole foods and plants to heal herself.

“What’s trendy now, I was reading about and researching then, like the raw food movement. I was learning about all the principles of different foods, where they come from, what they do in our bodies. It was eye-opening,” she says.

As Swift began her own journey towards health, she also started to experiment with the cosmetics she was using on a daily basis and blog about it. In 2009, she launched RMS Beauty with a few oil-based products. Using them on Victoria Secret models like Gisele Bundchen and Miranda Kerr, photographers and stylists noticed the difference. “These women had oil on their bodies and then matte faces because of the makeup. It didn’t match. So my oil-based products looked more natural. It looked like skin, but with a bit of shimmer,” she recalls.

Even if she had converted some models and stylists to her brand, the vast majority of people in the industry didn’t care for what Swift had to say. “I would try to talk to the beauty magazines, and I wouldn’t get any attention from the editors. At most, I would be slotted in a green beauty article. But I didn’t want to be in the green beauty section. I wanted more people to think about what they were using and what it was doing for their health,” she says.

It took a decade to get there. Today, Swift says that editors are keen to learn more, and have detailed discussions about parabens, phthalates, and other questionable ingredients. “But we have a long way to go. Much of the industry has gone to vegan and cruelty-free. But that doesn’t mean it’s actually good for your skin,” she argues. “It’s still filled with cheap ingredients.”

Swift’s approach to beauty is simple and minimalistic, which is why she’s found a core audience in women over 45 as well. Unlike the majority of cosmetics companies that target younger consumers, Swift’s products also speak to an older market. “The oil-based formulations don’t show as many wrinkles, and give a more natural, dewy look. I want women to celebrate their natural beauty, and not feel like they have to wear this mask every day.”

She speaks strongly against fillers and collagen treatments, especially for women who are experimenting with these options at a younger age. “When you get older, it will not look natural.”

At 63, Swift says that her business and her activism are her mainstays in life. Unmarried and with no kids, she says she’s free to travel, work, and continue to try to educate the public about the injustices of society and capitalism.

“It’s a slow, long fight. Some beauty companies have lobbyists who visit editors and journalists, trying to sell them on their ingredients and methods. They have deep pockets and it’s hard to fight that,” she admits.

Luxury brands have even offered to buy Swift’s company. But she has no interest. “I have nothing to lose and no interest working with them. So I’m happy to speak my mind and say no thanks. I’m not interested in just making money for the sake of making money.”

Swift in her offices, having a break.RMS

She’s certainly a firebrand, outspoken, and not concerned about her image. “I can be a bit intense,” she jokes. “I’m known for that. But I just don’t care anymore. I want to see change.”

The beauty industry doesn’t have strict regulations; while certifications for organic production exist, Swift argues that they are not robust enough. “So many of these young clean beauty founders are kids. And they’re turning to labs to formulate their products. They don’t know if it’s actually what they say it is. The labs don’t have the answers. They’re chemists with little understanding of health, nutrition, and they don’t know where all the ingredients are coming from.”

Compound that lack of transparency with little regulation in the US compared to Europe. Thus, when stories surface of chemicals appearing in umbilical cords or plastics in human stool, Swift is not surprised. “It seems that all these chemicals are affecting the average IQ, because it doesn’t seem like we are getting smarter about it and trying to stop it. Our leaders certainly are not.”

It’s further complicated by social media these days with young influencers advocating for products without doing enough due diligence. “Yes some of these influencers are getting paid heavily, and they’re happy to support products for the money.”

So can it be stopped? “With influencers, I think so. People are waking up to the fact many of them are just pushing product because they’re being paid by brands to do so.”

But when it comes to changing regulations, and the formulations, it’s a longer fight, she says. “Some are doing it quietly, taking out the chemicals, but it’s not going to happen overnight for sure.”