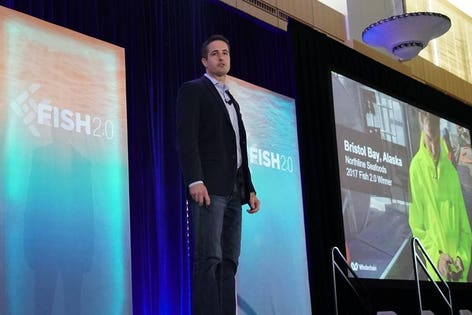 Here are two trends: More retailers want to know where their food comes from, mostly because more consumers are asking for that information. And a slew of startups are turning to blockchain technology, not for its cryptocurrency uses, but its security and transparency.

Enter Wholechain, a platform built on blockchain aimed at helping fragmented food and agriculture supply chains trace products’ steps from their source to their final destination.

Often called a virtual distributed ledger system, blockchain allows for a chain of connected and timestamped records, or blocks, that are linked using cryptography. Thus the data is not only easy to track, but also highly secure and hard to tamper with.

“We provide a way for the whole supply chain to capture and provide data,” says co-founder Jason Berryhill.

The startup also was one of six companies that received awards at the recent fourth—and last—Fish 2.0 biennial Global Innovators Forum, an 18-month process during which startups received feedback from investors, peers and others while they honed their strategies.

In 2018, Berryhill and co-founder Mark Kaplan spun off Wholechain from Envisible, a company they also launched that year. The latter, a joint venture with food distributor ARKK Food Company, uses the blockchain platform which is the foundation for Wholechain. The enterprise focuses on providing services for retailers to trace where the seafood they’re selling comes from, ensuring the fare is high quality and sustainably sourced. As important, working with Envisible, retailers can tap information about the fish’s provenance and create narratives that customers can get access to by scanning a QR code at the point of sale.

Tracing the Supply Chain: Something for Everyone

Wholechain, the company, is all about tracing the supply chain for the different parties along the way—helping everyone capture the data and structure it to be meaningful. That’s especially important for seafood, for which it’s trickier than for, say, pharmaceuticals, to pinpoint where the product originated. “This is something that starts out swimming in the ocean and moving around,” says Berryhill. Thus, data collection starts with fishers, who capture data using their mobile device. Then the system moves from processors to distributors and finally to retailers and restaurants. While Wholechain is starting with seafood, the plan is to add other food and agricultural products. (Think beef or chicken, for example).

Wholechain’s customers potentially will include all those different supply chain parties. For retailers, the attraction is the ability to understand and visualize data, while producers get a way to capture data in a digitized format. That’s a big change for fishers, who tend to be low tech. “A lot of time, we’re replacing pen and paper,” says Berryhill.

Last month, Envisible also launched a collaboration with Mastercard, which has over 100 blockchain patents filed and is “number three globally among top blockchain innovators,” according to a Mastercard press release. The credit card giant will integrate its blockchain-based system with Wholechain’s  front-end platform. The system is being piloted by Topco Associates, a U.S. food cooperative, for use by its member-owner grocery chains. First up is Food City, starting with salmon, cod and shrimp.