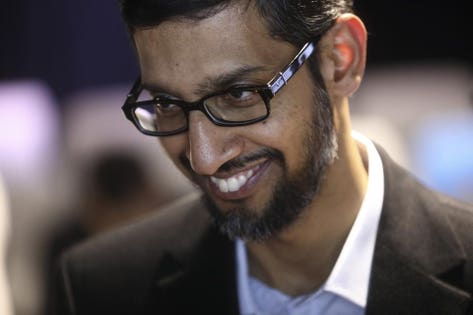 Silicon Valley’s aggressive push into London has been met with positive headlines but could turn out to be disastrous for the city’s flourishing tech startup ecosystem, which is the largest in Europe by some distance.

The U.S. tech giants—who at home face antitrust probes and mounting public anger over data hoovering and privacy lapses—have been welcomed to London with open arms by Prime Minister Theresa May, London Mayor Sadiq Khan, and countless other politicians.

But their presence could turn out to be something of a curse. Mark Tluszcz, a partner at VC investors Mangrove Capital Partners and the chairman of website building platform Wix, said the arrival of Silicon Valley on mass is a “looming problem” for U.K. startups, hailing the issue as a bigger threat than Brexit.

“They’re calling up all the companies you can imagine and saying I’ll pay you twice what you earn at your startup,” said Tluszcz. “That’s ok if you’re only hiring 100 people or 200 people. But these guys have decided to make London a massive hub and with that comes a danger.”

Google is building a campus for 7,000 people behind King’s Cross train station, while Facebook announced at the end of 2018 that it was leasing two large buildings down the road, bringing its total London workforce up to around 2,300 staff. A couple of miles to the east, in Shoreditch, the beating heart of the London startup scene, Amazon opened a new office in 2017 that increased its total U.K. workforce to 5,000 staff.

“This sounds good to the city officials and in the short term it is kind of cool to have Google and Facebook here,” said Tluszcz, who made $200 million off an early $2 million investment in Skype . “But in the long term it’s very unhealthy because it sucks up the finite resources you have.”

Inside view from the tech recruiters

Stevie Buckley, the cofounder of HonestWork, a job board for tech companies and startups in the U.K., said poaching talented individuals from fast-growing startups is a “standard practice” for Silicon Valley firms.

“When Silicon Valley companies expand or establish themselves in London, the default step is to look to companies like Deliveroo, Monzo, et al, and ‘acquire’ a vast number of their most talented people,” said Buckley. “It happens all the time. Their goal is to acquire a large volume of quality talent as quickly as possible. By targeting the likes of the companies mentioned, they can make assumptions on the calibre of talent given how rigorous those companies vet prospective employees.”

This hiring spree is good news for talent but a headache for the founders of British and European startups. It typically takes six to 12 weeks to identify, attract, interview, and hire an experienced software developer in London, according to Buckley.

“Now extrapolate that to needing to hire hundreds of developers (like in the case of Deliveroo for example) and you have an enormous and costly logistical challenge,” said Buckley. “Compound that challenge with a Silicon Valley giant moving into your neighbourhood and acquiring a significant proportion of your staff and it can have a profound, and far reaching impact on the companies ability to scale and meet investor expectations.”

Another tech recruiter, who wishes to remain anonymous, said Silicon Valley firms are causing a lot of startups to feel pain, calling out Deliveroo, Improbable, and Onfido.

Improbable seems to be one of the hardest hit in recent years with Google poaching around a dozen engineers and recruiters from the SoftBank-backed virtual worlds startup, which is valued at over $2 billion. Engineers Miraan Tabrez, Harry Ragan, Bill Cranfield, Sam Corcoran have all left Improbable to join Google in engineering roles over the last two years, while Roxanna Aliabadi left to join Google as a product manager.

Over at Deliveroo, there have also been several high-profile departures to Google and Facebook. For example, Alex Thompson, who led the product team that built the Deliveroo driver app, left his senior product manager role in May 2018 to join Facebook as a product manager, while data scientist Giacomo Giussani left to join Google in August 2018.

In a predictably diplomatic response, Deliveroo told Forbes that it welcomes the presence of global tech firms in London and downplayed the impact they have on its ability to hire and retain talent.

A Deliveroo spokesperson said: “Deliveroo is attracting world class tech talent from all over the globe and the capital’s growth as a home for international tech expertise only helps with recruitment. International firms increasing their presence in London is a vote of confidence in UK tech and and something we should all welcome.”

At Onfido, which makes ID verification software, Paul Sarbinowski left his job as a security engineer in November 2018 to join Google in the same role.

Husayn Kassai, the cofounder and CEO of Onfido, told Forbes that it’s two-way traffic between his company and the Silicon Valley firms.

“The big tech giants are looking to hire as many as they can. But for tech talent, the giants are starting to feel more like corporates,” said Kassai. “We’re equally finding that seniors want to join startups.”

Kassai said Onfido hired its VP of AI research from Amazon, while its CTO used to work at Spotify and Adobe. “If they’re going to poach anyway, we may as well hire from them—they have a bigger talent pool,” he said.

Why are people moving?

British tech salaries are dwarfed by the pay packets at the U.S. tech giants where mid-level engineers can earn an annual salary in excess of $127,000 (£100,000), and executive and management positions can be much higher, according to a tech recruiter. “The salaries there, mainly in product and engineering, have gotten out of hand,” the recruiter said.

While Silicon Valley firms are offering a lot of money to their U.K. staff, they pay their U.S. staff a lot more. “There’s an awful lot of incredulity from US-based tech folk that London pay is so low by comparison to the West Coast,” said Buckley.

Potential recruits not won over by the generous pay and stock options could also be tempted by lavish canteens, barista coffee, and other bougie benefits offered by the tech giants.

Silicon Valley is also doubling down on Israel

Silicon Valley firms have also invaded Tel Aviv in Israel and Tluszcz says firms like Google are constantly trying to poach his staff at Wix. Tluszcz refused to disclose how many staff had made the switch.

“I don’t think London should be at all afraid of Brexit,” said Tluszcz. “But I think they should be afraid of these large U.S. companies setting up huge facilities here.”

Some plucky upstarts are able to hire staff away from Silicon Valley by offering them stock in their companies, or selling them on “the mission”.

There are also plenty of people that leave the likes of Google and Facebook to launch their own startup. All you have to do is attend one of the Xoogler events to see a bunch of former Googlers pitching their new companies.

This week, GP Bullhound predicted that Europe will have its own $50 billion tech “titan” by 2021. But if Google and Facebook continue to poach from U.K. startups in the way that they have been, then it’s going to be hard for the small island nation to spawn a tech behemoth of its own.