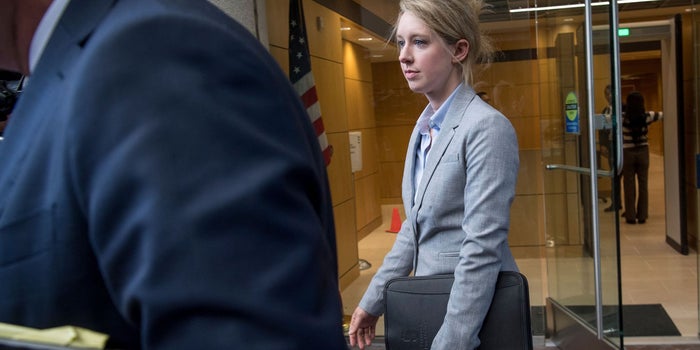 Serebral360° found a great read by Entrepreneur article, “What Do Pitching and Investing Look Like In a Post-Elizabeth Holmes and Theranos World?.”

At its height in 2015, blood-testing startup Theranos was valued at $9 billion and its founder, the then 31-year-old Elizabeth Holmes had a net worth of $4.5 billion. She was the youngest woman to become a self-made billionaire. She was held up as a Silicon Valley wunderkind.

The only problem was that it was all a lie.

Holmes launched her biotech company on the promise that her device could conduct a wide range of medical tests on just one drop of blood. She started it as a 19-year-old Stanford drop out, and as the company grew, it partnered with Walgreens and Safeway, raising $700 million from investors that included the Walton family and Rupert Murdoch. The company’s had two former senators, two former secretaries of defense and two former secretaries of state on its board, including Henry Kissinger. The company had FDA approval.

And by the end of 2018, it had all unraveled. Holmes had left her post as CEO, been charged with federal criminal wire fraud, paid a $500,000 fine to the SEC, and officially shut down the company.

By now, the story of Elizabeth Holmes and Theranos’ rise and fall isn’t just infamous, it’s ubiquitous. All the details of the case have been comprehensively chronicled by Wall Street Journal reporter John Carreyrou, who first broke the story, in his book "Bad Blood: Secrets and Lies in a Silicon Valley Startup,” an HBO documentary series called The Inventor and a podcast called The Dropout. And now Hollywood is taking a crack at the story, with a Hulu series starring SNL’s Kate McKinnon and a feature film with Jennifer Lawrence currently in the works.

While Theranos is an extreme example of hubris and deception in Silicon Valley, it has had a ripple effect, leading to conversations around the importance of more thoroughly examining the efficacy of up and coming businesses at the intersection of health and tech. And there are some lingering questions. How do you protect your intellectual property and while still leading with transparency? What does real, accountable due diligence look like?

Alison Darcy and Nisha Dua are an entrepreneur and venture capitalist respectively who have grappled with these questions from both sides of the table.

Related: Elizabeth Holmes, Theranos and the Myth of the Glamorous Entrepreneur

Dealing with data after Theranos

Darcy is the CEO and founder of Woebot, a company that is the maker of an AI chatbot therapist that helps users manage their mental health. She comes to entrepreneurship from academia and medicine. She is a clinical research psychologist and taught psychiatry and behavioral sciences at Stanford School of Medicine where she earned her Ph.D.

She launched the company in July 2016 and says that from the start, a commitment to demonstrating clinical outcomes was a key foundational piece of the company’s DNA. But in getting acquainted in the wellness and tech space, she was surprised by how often data and clinical outcomes weren’t as big of a priority for other companies in the space.

Darcy recalled meeting with entrepreneurs who would come to speak with her about her research and feeling somewhat disconcerted and disappointed by the fact that they weren’t placing a bigger emphasis on solutions with a clinical framework.

“There are things that as clinicians we would just never do because we have very stringent training and ethical principles,” said Darcy. “I think that was one of the advantages that I had when fundraising was, I’m coming from this solid background. I know a really good intervention when I see it, and here are the data that demonstrate it.”

But Darcy says that for all her concerns, her fundraising process was one that was above board.

Related: Theranos: The House of Cards That Elizabeth Holmes Built

“Occasionally you do hear about these companies that are raising huge amounts of money when they haven’t launched anything yet,” said Darcy. “There is this emphasis in the early days of a company where you’re trying to validate an idea, sort of doing Wizard of Oz techniques and the fake it ’til you make it principle. You see that a lot in AI in particular because it’s very hard to create an AI prototype without a bunch of data.”

But it came time for due diligence, she recalled being asked about the organic signs of growth she was foreseeing for the company — not the kind of growth that the company could hack or pay for, like advertisements or acquisitions. She also fielded questions about how the solutions her company was developing worked and who they wouldn’t and wouldn’t help. As of March 2018, Woebot had raised $8 million in VC funding from New Enterprise Associates and Coursera and Google Brain co-founder Andrew Ng, who also sits on the board.

Seeing beyond the buzzwords

In burgeoning spaces like health and wellness, and artificial intelligence, where the ideas are big and there isn’t a lot of precedent, Nisha Dua, partner at seed-stage venture capital firm BBG Ventures, which focuses on female-led consumer internet and mobile businesses, says data, substantive technology, and a clear ability to lead, hire smartly and ultimately execute is paramount to helping investors like her decide who to fund.

“Theranos is an extreme example, but we live in a moment right now where you have all these buzzwords. So artificial intelligence is a buzzword and machine learning is a buzzword … and you really need a lot of data to actually make true on the promise that you’re selling. So it’s really critical to dive deeper behind those sort of flashy pitch decks and the buzzwords,” said Dua.

Dua says that sometimes, even if an idea is compelling if the company is an industry that she isn’t as familiar with, or she doesn’t see how she can be a value add, she will pass on that opportunity.

“There were certainly companies I think after the Theranos story was revealed in the life sciences space that we passed on because although we loved the founder and we loved the idea, but we did not have the confidence that we could diligence them appropriately,” recalled Dua. “And some of those companies have gone on to raise a lot of money. And I believe for good reason. So we might say, well that was a miss, but I think that was the right call at that time. And I think we would make the same call again, particularly in that space where neither of us have that sort of health or life sciences background.”

Dua says that for her part, due diligence means speaking to as many experts as she can if she isn’t as versed in a particular industry. It also means seeking out founder references, to see if they are someone who is a solid investment, or who just might talk a good game but is more flash than substance. But what would inspire an investor to back someone when they can’t do that due diligence properly? Depending on the situation Dua say that it can come down to a number of factors.

“I am sometimes surprised by the number of investors who get excited by a company and by the idea and by the founder and don’t really dive into what is being built. What is possible? Have I talked to experts who knows this area better than me?” The problem, Dua explained, is that “there’s a lot of money in the market and you don’t move quickly enough you might miss a competitive deal. And you are taken by the promise of changing the world sometimes.”

Related: 8 Tips Entrepreneurs Can Take Away From the Theranos Scam and Its Aftermath

Transparency and taking the long view

Darcy says that to her, changing the world she operates in, especially addressing stigmas around mental health, means making her products as accessible as possible, both in terms of user engagement and the language that they use to talk about how Woebot works.

She explained that making that a number one priority means that it could potentially slow the company’s expansion, but Darcy says she is taking the long view. She says that the most valuable element of her business is the trust their users have in them because without it, there wouldn’t be a product.

“We are HIPAA-compliant, but we actually legally don’t need to be. So there aren’t regulatory processes that really cover this grey area of digital mental health. And in that context, we just feel the most important thing is transparency and empowering people. So we aim to provide as much information as we possibly can,” says Darcy. “I’m sure we would have many more people using the products and engaging early if we could shorten [the on-boarding process]. The focus on clinical outcomes research slows us down, but we feel like it’s the longer term right thing to do. The flip side is a bunch of health companies in our sector that are established by entrepreneurs who might be well-meaning, but maybe have gaps in some aspects of what it means to create an intervention has could undermine people’s confidence in general in the field. And that would be a terrible opportunity lost.”

Related: 6 Lessons Entrepreneurs Can Learn From the Fall of Theranos

Dua says that when it comes to due diligence for the founders that pitch her, she has her own particular set of standards. She says that entrepreneurs should come to the table with a high conviction in their ideas and their abilities and comprehensive knowledge of what sets your business or technology apart from the pack.

She says mart founders understand their own weaknesses and can hire for people that can help them with what they might lack. They can also be coached and take feedback. Because if you don’t take criticism or feedback well in a pitch environment Dua says that makes her doubt that you can take feedback from customers. She also looks for a skillset that includes flexibility and mind for problem-solving.

“If you have self-awareness, if you can take feedback, then you probably have a stronger ability to adjust, pivot, iterate as you are developing your product. And then execution. A good idea is just a good idea. It Is completely lost without the ability to execute,” explains Dua. “Some people say how do you test for that? The founders I observe this in, it’s not that they have all the answers, but they’re always thinking three steps ahead. They’ve plotted out all the questions that might come up. They might not have the answers to all of them, but they’ll be able to say this is how we’re thinking about it, this is why we haven’t dealt with it yet, why we’re leaving it for later, this is how we plan to solve for it in the future.”