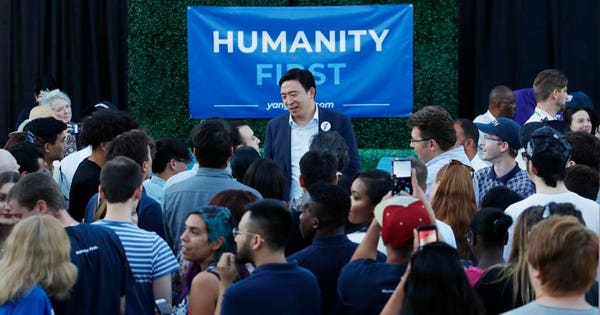 At the most recent Future of Everything Festival, presidential candidate Andrew Yang jokingly said that when the first Democratic debate takes place in Miami on June 26th Americans will be wondering, “Who is the Asian guy standing next to Joe Biden?”

Maybe Americans ought to be paying more attention to his platform than simply his ethnicity.

I’ve begun to devote a little more thinking to Yang in recent months, wondering aloud where he’s headed. I’m also pondering whether Americans—or Democrats who hold power to select their presidential candidate to confront President Trump—are ready for a GenX leader who is equal parts inspiring, whacky, creative and mathematical.

I, for one, think America might want to give Yang and his platform a chance, if not a hard glance.

Yang is gaining some recent headlines with his take on universal basic income (UBI). He coins it “The Freedom Dividend,” a $1,000/month stipend for every American adult over the age of 18. Why UBI? Yang believes there is a coming robot and automation apocalypse where thousands upon thousands of workers will be displaced.

He may be right.

McKinsey predicts that by 2030, jobs like dishwashers, equipment operators, food-preparation workers, general mechanics and truck drivers in America will witness a 31% decrease in employment due to automation. That’s a lot of people put on the streets should there be no retraining programs made available.

The Freedom Dividend is a potentially positive step in the direction of helping those displaced by the coming wave of automation. Expensive? Yes, of course. It’s in the neighborhood of $3 trillion per year. Yang has a plan to fund it, in part, through a value-added tax (VAT). Naturally, there are naysayers.

But there may not be an alternative for the US. For example, there are approximately 5 million professional drivers in the US be it driving trucks, taxis or others of its ilk. What happens when a fraction of those drivers are dislodged by an autonomous driving robot overlord? What happens when there is no skills replacement program?

UBI just may be the answer to temporarily help the thousands upon thousands of drivers suddenly out of work. And rest assured it is coming.

There are other components to Yang’s platform that deserve some attention. He wants to revive the Office of Technology Assessment (OTA), an organization first commissioned by President Nixon but sunset in 1995. OTA acted as an early warning system against the undesirable side effects of developing technologies. It sure could have come in handy over the advent of Facebook and its kind.

Yang also believes data ought to be a property right. His articulation suggests the following: “Data generated by each individual needs to be owned by them, with certain rights conveyed that will allow them to know how it’s used and protect it.” It’s hard to disagree that our data should be in our possession, specifically as a right.

Another idea that is gaining traction with the public and his ever-growing army of “Yang Gang” meme members is “Human Capitalism.” The policy itself needs additional polishing and depth. At first blush, however, Yang hints at something that might be worthwhile as society contemplates a factory reset of what it means to be in business. Yang’s initial thoughts include the following:

I have written extensively about the need for corporations to shift how they operate. No longer should they be fixated on profit and shareholder return. Rather, corporations exist to serve society and its stakeholders made up of customers, employees, community and the environment. Only then does it deserve a fair financial return.

Human Capitalism, as depicted by Yang, seems to be venturing closely toward this line of thinking. If so, it’s necessary and ridiculously overdue.

“The opposite of Donald Trump is an Asian man who likes math,” said Yang at a recent rally.

It’s a joke to rev up the crowd but as a Canadian with no vote or say, I do hope Democrats take a serious look at the entirety of Yang’s platform.

It may be just what the country needs.