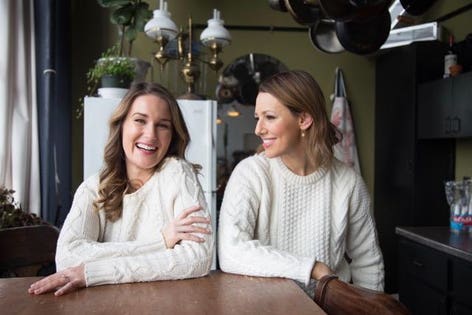 Jennie Ripps, founder and CEO of Owls’ Brew, was inspired by the idea of combining tea with botanicals to deliver taste with wellness benefits. When she started working with Marie Littlefield, cofounder and president, they decided to spike their drink and develop tea-powered boozy beverages with good ingredients.

They started working on their connotations in 2011. By 2013, they launched Owl’s Brew Cocktail Mixer. The two have grown the company from just them to 9 employees and have raised $4.4 million. In 2014, the Specialty Food Association selected Ripps as one of the “15 under 35,” and Littlefield as 2016 Forbes a “30 under 30.” This month, they launch Owl’s Brew Boozy Tea.

When you’re creating a new beverage, there’s no manual. “It’s like putting together a puzzle without a picture guide,” said Littlefield. “You start mixing things up in your kitchen, but then you have to bring it to market.”

“We didn’t want to use tea concentrate because it makes the flavor so much different,” said Littlefield. Being fresh brewed was essential to the recipe. “No one had ever produced a fresh-brewed tea cocktail mixer before.”

The kitchen recipes needed to be translated into a beverage formulation that had color, taste, and aroma that held up over time and under different conditions. It had to be shelf stable. Ingredients needed to be sourced. Vendors had to provide quantity, quality and a good price. Owl’s Brew’s competitive differentiation had to be expressed, not just by the taste of the product, but by its packaging.

They needed a distributor who would not only have relations with wholesalers and retailers and transport products to them but provide guidance on product placement, train retail employees and distribute merchandising materials. And, of course, they needed to market the product to consumers.

Neither Ripps nor Littlefield had gone to business school. They needed a crash course. Ripps participated in the first cohort of the Tory Burch Foundation training program for women entrepreneurs in New York City, done in collaboration with Goldman Sachs 10,0000 Small Business. “It helped me learn the language of business,” said Ripps.

“We sought mentors who had done something like what we were doing,” said Ripps. “We were able to avoid a lot of washouts and wasted time.” They also built a network of peers, beginning with the women in the food and beverage industry who were part of Ripps’ 10,0000 Small Business cohort. “Mentors help with our growth strategy,” said Littlefield. “Peers help with day-to-day challenges and provide moral support.”

But, even so, things don’t always go as planned, especially in the beginning. “The first quarter after we launched, we had three times the amount of POs [purchase orders] that we projected. We didn’t have enough bottles and hadn’t allocated enough capital for this amount of production.” Unexpected growth can be a good problem to have, but it is a problem that has to be solved.

In the beginning, the pair bootstrapped the company, providing the funding themselves. Before they launched the Cocktail Mix, they raised a small friends-and-family round, followed by a larger one after the launch. Money raised from friends and family paid for the extra bottles that were needed.

As they ramped up to launch Boozy Tea, the duo raised Series A from ZX Ventures, the incubator and funding arm of Anheuser-Busch, and from Cambridge SPG, a corporate venture fund in the food and beverage / consumer packaged goods space. Ripps and Littlefield met ZX through an advisor and Cambridge through a trade show. The duo also now use debt —   non-dilutive funding — financing that does not require the sale of your company’s shares. I’ll be interviewing the cofounders about how they financed Owl’s Brew at the Million Dollar Summit on April 5th, 2019.

Ripps and Littlefield still need peers, advisors, mentors, and funders but now they are most likely to meet them at trade shows. They cultivate relationships with people they have a rapport with and seek their advice when appropriate. Some have been elevated to a more formal relationship, a seat on the Owl’s Brew advisory board.

A board of advisors can provide objective advice about the marketplace and future trends. They can make referrals to strategic alliances, customers, employees, and funders. Unlike corporate boards, advisory boards have no fiduciary responsibility, and their advice is non-binding. Some are hands-on, meeting monthly or more, even getting involved in the daily grind. Others meet quarterly, with an eye to the big picture.

Ripps and Littlefield also attend entrepreneurial summits where founders at a similar stage of growth are brought together for roundtable discussions and problem-solving. Questions the two have asked include, “How do I grow as a leader?” and “How do I build a highly motivated and effective team?”

You don’t need to be a cartographer to make a roadmap for your business, but you do need guides who will help you when you hit rough terrain and need to take a detour. How will you find the guidance you need?