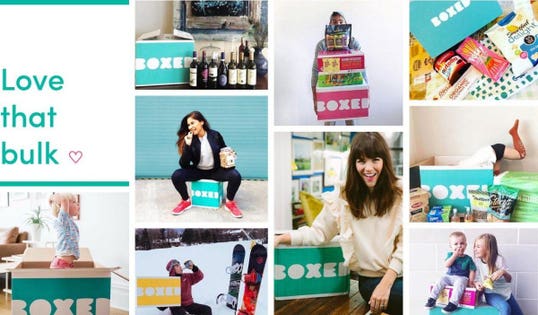 Serebral360° found a great read by Forbes – Entrepreneurs article, “Why Company Culture Might Just Be The Secret To Boxed Winning In Retail.”

Most investors jump at the chance to invest in a serial entrepreneur that successfully sold their first startup to a publicly traded company.  And while Chieh Huang of Boxed fits that description, he will be the first to tell you this second startup has been a vastly different experience.  One of those differences has been the importance that Chieh and his team place in culture at every single level of the company.  I recently sat down with Chieh to talk about this and why he thinks that culture might just be their secret weapon in disrupting retail:

Dave Knox:       You started Boxed at the age of 31 in the garage after selling your first startup, Astro Ape, to Zynga. How did your viewpoint change in your second time around as an entrepreneur?

Chieh Huang:    As strange as it sounds I learned more of what not to do the second time around than what to do. Meaning that we had a very successful result in our first startup, even though we didn’t do a lot of things right. It was just the same four folks in someone’s mom’s attic figuring it out, and so in a lot of ways we had little education in that first startup on what not to do in our second one.

A direct example of that would be the delegation of roles as we’ve evolved.  It is about how we are breaking out of from a culture that’s just run by the co-founder to graduating to a culture where the co-founders are part of the executive team, but there are no kind of subcultures or sub-executive committee where the co-founders make all the important decisions. That basically was the case in our first company. Now it’s not the case in Boxed because we would never be able to scale the management team if we remained that way.

Knox:   You’ve given a lot of talks where you’ve covered the importance of culture and the impact that people have on that.  As a result, you’re a lot more hands-on in hiring than probably a lot of CEOs are and you still interview every candidate as a final step in the process.  Why do you feel it is important to devote this amount of time to interviewing vs just delegating it?

Huang: I still technically interview them. It’s just about 15 minutes these days, and it’s usually only when we’re about to give them their offer, and I just want to make sure that they’re normal people. We spend so much time together with our coworkers that I just don’t want to be surrounded by jerks because the reality is I spend more waking hours in the office and with coworkers than I do unfortunately with my family on most weekdays. I just want to know that I can sit next to this person and kind of stand them in a normal conversation for 15 minutes, so it’s a relatively easy interview, but that’s more of what I’m checking.

“Those folks are more important than any single executive in the company.” @Astrochieh, CEO of @BoxedWholesale

But when it comes to people and we versus I, I fundamentally believe that even the “the lowest level of employee” – the folks on the most junior rung of the totem pole – as a group those folks are more important than any single executive in the company, including me. The reason why I have come to that conclusion is I have done this very morbid exercise of just thinking in my mind if I got hit by a bus tomorrow the company, you know what, they’ll go on. They’ll try to find a new CEO, they might elevate someone, and they will just keep going on. The reality is on the opposite side if every single fulfillment center employee or corporate employee walked out in unison tomorrow the company is done.

And so folks who believe in that power of the collective spirit I think are really important versus the folks that just say I did this, I did that, and if I wasn’t here this wouldn’t get done because that could be pretty toxic over time.

Knox:   With that in mind, you have done some pretty remarkable things to support this “we” culture including unlimited maternity and paternity leave, helping pay for employee weddings, assistance in paying for children’s college tuition, and many more. With all this debate around wages and working conditions, you’re taking an approach that’s pretty atypical in the retail world. What led you to this approach?

“I want to treat folks w/the respect that my parents were not treated with” @Astrochieh, CEO of @BoxedWholesale ‏

I think the business aspect of it also pencils out more than most folks actually think that it does. The crazy thing that we’re seeing today is that we’re in a full-on talent war when it comes to employees – from marketers to engineers to fulfillment center. If you just take the corporate side of things, a headhunter for a mid-level engineer costs anywhere from $30,000 to $50,000 these days. A director and VP level hire is about $75,000 for recruiters, and a C level hire is between a $100,000 to $150,000. If you just think about like being able to inspire folks and increase retention in those ranks and decrease voluntary exits, the amount of money that you save is just simply staggering. And that’s not even factoring in the lost productivity of needing to refresh that role and getting someone trained into that role.

That is the way I think from a business perspective that we have been able to make things pencil out. The more esoteric point of view is that at the end of the day the consumers have just an abundance of choice when it comes to buying Oreo cookies and toilet paper, and if everyone is sharp on pricing and everyone is eventually going to get the one day or two day or same day shipping, the only thing left for you to direct where you spend your money is the brand, and if our brand stands for some good in the world I feel like we’ll have a good amount of customers if all things are equal that I want to shop with us. That is why we do what we do.

Knox:   When you think about that culture, you have an interesting balancing that you have to do.  On one hand you’re doing these amazing perks for your employees, but on the flip side, you’re working in an industry that is tight margins and lots of choices.  As a result, you’ve been very thrifty since day one in terms of conservative spending, flying in the middle seat in coach when you’re going somewhere, etc. How do you get your employees to think about why you are doing heavy spending on one side, but very conservative spending on the other side?

That’s actually a really good question that is rarely asked from the outside, but we are constantly being asked from the inside, and my very simple answer is this. We want to spend money where it counts, and so when you come into our office you won’t see the ping pong table, you won’t see a beer tap,  you won’t sleep or nap pods. A lot of those kind of fringe benefits that a lot of other startups provide you won’t see that here at Boxed, but you will see will be that the folks who aren’t able to pay something as unfortunate as their parent’s medical bills or if they’re stricken with a long term illness that overtime disability doesn’t get their bills paid for, those are the things that we pay for and that we activate versus giving everyone unlimited smoothies in the morning.

And for us, I’m not here prophesying about being the right way and the way that everyone should follow, but it’s one that I firmly believe in.  If you join Boxed, you’ll learn that this is how we do it. You don’t have to agree with it. It is kind of a strange quark. I fully admit and own that, but I think it’s one that’s become core to our culture.

Knox:   So to speaking of quarks, last year in 2018 you gave a TED Talk that was around confessions of being a recovering micromanager.  How has your management style evolved over your career and what inspired that TED Talk?

“Managing people who do the work is a completely different skill set than actually doing the work.” @Astrochieh

Huang: Oh, man. It’s just so hard.  I’ve got two kids, but really I’ve got three kids, right? It’s my son, my daughter, and Boxed, and it’s really hard to kind of let go sometimes. You know, when at the outset you’re packing every box, and you’re writing every note, and you’re raising every last dollar, and you’re hiring every last person. You have this vision of what it should be, but over time I forgot that I actually need to let go in order for the vision to actually happen. There are not enough hours in a day for me to do everything and also by being the helicopter CEO I was actually stifling the freedom of the very smart people that we hired. The more I thought about it, the more I understand why that was the case, but it was also very difficult to let go.

So, overall, the crazy thing about life is that if you’re really good at what you do you get hired to do something and if you’re really good at it you get more work.  Then you get more work and at one point in time, you actually get rewarded with not doing work. You get rewarded with the job to manage people and managing people who do the work is a completely different skill set than actually doing the work. And I realized I wasn’t making that transition fast or well enough, and so it was my confession to the whole world that I was not good at my job at that point in time.

The conversation has been edited and condensed for clarity.