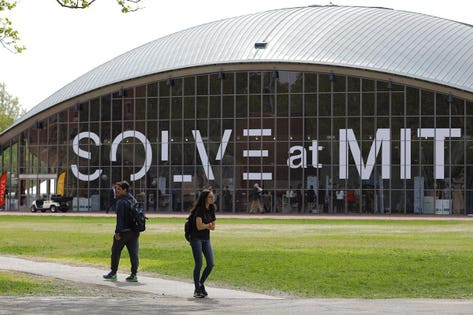 One of the reasons that wage growth in America is stagnant, even while the country is at full employment, is that large corporations now employ more Americans than at any time in the last generation.  According to the Congressional Research Service, only about 30% of net new jobs in America are created by large companies, but a little over 50% of Americans now work for them.  This combined with the decline of organized labor and a drop in entrepreneurship has given large employers significant leverage over the wages and benefits they offer their employees.

In the short term, companies can keep shareholders happy through cost-cutting, wage freezes, offshoring and outsourcing.  In the long term, they have to innovate and launch new products and services.  For most Fortune 1000 companies, the easiest path forward is to acquire startups that have already developed and tested new products or technologies.   Large companies have always conducted R&D, employed robust product teams, built complex supply chains and operations, but have struggled to build corporate innovation programs that commercialize products as effectively as external startups.  The realization that startups, university researchers and crowd sourced solutions can solve certain problems more quickly and cheaply than in-house experts has, over the last decade, led a growing number of corporations to adopt open innovation principles and think more broadly about how they source and acquire innovation.

General Motors is a prime example of the changing view among large companies towards innovation, startups and corporate culture.  Ten years ago, executives at GM were often paralyzed by the uncertainty presented by startups and their technologies.  They were concerned about the longevity of a startup to support GM when customers often keep their cars for ten years.  They were concerned about the impact that a failed technology may have on their brand. And they fretted about intellectual property.

In the last few years, GM has taken a decidedly different approach.  At the MIT Solve conference on May 7th, GM President Mark Roberts outlined the multiple ways that outside partners are becoming critical to GM’s products, services and strategy.  Roberts talked about GM’s vision for “Zero Crashes, Zero Congestion and Zero Emissions”.    To achieve this vision, GM had to move far beyond its comfort zone.  While it certainly has the in-house expertise to focus on zero crashes, the concurrent goals of zero congestion and zero emissions require partnerships, collaboration with startups and skills training for GM employees.

Among the steps taken by GM include sponsorship of the MIT Solve program, which runs global challenges to match up innovative startups with companies and funders focused on those same challenges.  Through its MIT Solve partnership, GM has engaged Refactored.ai to retrain its workers in the data sciences; and with Livox to evaluate non-verbal communications and autonomous touch screens for its vehicles.  GM has also sponsored the MIT Solve Community Innovations’ and Circular Economy Challenge’s to identify local and social innovations to support through its economic development and sustainability efforts in Detroit.  According to Ken Kelzer, VP of Engineering for GM, the company set aside the fears of a decade ago, adjusted to the speed and technological change of startups and embraced the culture change and shared values that comes from community partnerships.   In addition to the MIT Solve partnership, GM has “embedded” a full-time staffer to monitor and scout technologies at MIT and in the Greater Boston area.

Few have watched the changing relationship between Silicon Valley, startups and corporate America like John Sculley, the famed former CEO of Apple Computers.  Today, Sculley invests and advises startups around the country, including RxAdvance in healthcare and Zeta Global in marketing technology.   Sculley is optimistic about the impact that platform technologies and startups in the life sciences can have.  Yet he is somewhat skeptical of the role that large corporations can play in that innovation.  Sculley emphasized that organizational culture is key for innovation to succeed.  From his time at Apple and beyond, Sculley believes that Silicon Valley provided two important gifts to the business world.  The first was the engineering culture of Silicon Valley in the 1980’s (as opposed to the celebrity culture of today).  The second was the importance of small teams to achieve rapid, breakthrough results.  To Sculley, the challenge facing corporate innovation is that companies want to build internal startup environments without changing their culture, with notable exceptions like IBM under Louis Gerstner and Microsoft’s recent success under Satya Nadella.   In many ways, Sculley believes that corporate-startup partnerships are going to be even more critical in new areas like artificial intelligence – a field growing too rapidly for a large organization to grasp.

Sculley looks back at Silicon Valley of the 1980’s and 1990’s as the “tool making era” – when companies made the tools and hardware required to build computers and the infrastructure to achieve Moore’s Law.   He believes today’s’ startup celebrity culture is too obsessed with “disruption”, rather than creating useful tools for society.   This view aligns with that of leading economists like Robert Gordon, who believes that the innovation of today is less relevant than in the past.  In the area of health care and life sciences, Sculley sees the old model of Silicon Valley living on – with the tech sector building tools for improving patient care through analytics, gene editing, the microbiome and robotics.

A somewhat contrarian view, originally espoused in their 2004 best seller, “Blue Ocean Strategy”, is held by INSEAD professors Chan Kim and Renee MaBourgne.  They advise large companies to focus on new opportunities, or blue oceans, rather than competing in the “red oceans” where competition is fierce, and the best a company could do was gain a small amount of market share.  In their 2019 follow up, the authors argue that companies should be more actively considering non-disruptive technologies.  According to Dr. MaBourgne, “Disruption matters.  But our research found that the focus on disruption blinds organizations to another powerful way to innovate and grow.  The other path, and what we would argue is the more important path, is what we call non-disruptive creation.  Non-disruptive creation occurs when you create a new market where there once wasn’t any so there is no displacement of established firms or markets.   “

The example used by MaBourgne and her co-author is Pfizer’s blockbuster drug Viagra.  They argue that Viagra didn’t disrupt another market, but was a non-disruptive creation.  This may be true from a business strategy perspective, but obviously Pfizer put hundreds of millions into scientific R&D and clinical trials to bring Viagra to market.

Kim and MaBourgne also commented on the fact that large companies are acquiring startups as the preferred means of innovating and launching new products and services.  “For us the idea that large companies don’t leverage and enlist the creativity of all their people on the journey to shift from red to blue oceans, is a hugely missed opportunity.   As our research reveals, people at every level are far more creative and capable than most organizations are tapping into.  What organizations have been lacking until now is a systematic way to draw out that creativity and channel it to unlocking market-creating opportunities.”  Certainly, corporate accelerators and innovation programs are one way to unlock that creativity.

They go on to write that “technology matters but it is not the defining factor in creating commercially compelling new markets. While new technology may be exciting and a great enabler, it does not open up a new market on its own. What opens up new markets is what we call value innovation, which is when an innovation delivers a quantum leap in value for buyers.  Many mistakenly view technology innovation and value innovation as synonymous.   But they are not the same.  The point is that new technology will not open new markets unless they are tied to delivering overwhelming value for the users. We have seen time and again that while technology innovators may lay extraordinary eggs, often they are not the ones who ultimately hatch them.”

In our current economy, more and more of the egg-hatching is being done by large corporations.  GM seems to be embracing it, while senior statesman Sculley sees it more limited to certain industries.  Hopefully we get to a point where, once again, what’s good for GM is good for America.