Serebral360° found a great read by Forbes – Entrepreneurs article, “Why Saying ‘I Don’t Have Time’ Is A Great Way To Lose Trust With Your Teammates.” 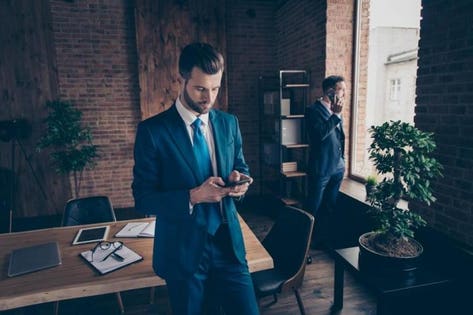 Teammate waiting for manager to get off the phone. Getty

Recently, while taking a quick breather from work, it dawned on me that a lot of people assume that I’m busy or that I don’t have time to help them. To be honest, that made me feel both guilty and shameful. I’ve always prided myself on being supportive of others, and I make an effort to be more than willing to lend a hand.

That hasn’t been the case as of late. There have been times when I’ve felt completely overwhelmed because things were hectic, both at work and at home. As a result, I automatically say, “I don’t have much time for that.”

The worst part of defaulting to “I don’t have time,” however, is that it can absolutely hurt the trust within a team. Ultimately, if team members start to believe somebody never has time, it affects that person’s ability to be a good teammate. And can you blame them for losing trust in that person?

Saying “I don’t have time” can lose trust with your colleagues in several ways:

You’re not as busy as it seems.

I’m in no way suggesting that you aren’t busy. Between running multiple businesses, spending time with my family, speaking, and writing, I don’t have a lot of spare time. But I think we can all find some extra throughout the day, and it starts with time management.

If you stop what you’re focused on every time you receive an email notification, it’s going to take you much longer to complete tasks. Instead of spending your morning commute on social media, assist your teammates by answering a question or sending them a piece of content they can use.

There’s no right or wrong way to manage your time effectively, but you need to clearly identify how you’re spending your hours so you can eliminate time wasters. When you do, you’ll realize you’re not as busy as you thought.

Being busy damages your credibility and reliability.

Think about a time when you asked someone to help. It could have been as simple as asking for a client’s contact information or more time-consuming, like staying late to finish a project. If his response was “Sorry, I don’t have time,” how did that make you feel? Deep down, you know he could have found the time — he just didn’t want to.

You may not have availability at that exact moment, but when you tell others you’re too busy, they take that as a sign that you’re avoiding or neglecting a responsibility. If this becomes a common occurrence, they’ll eventually stop asking for your assistance because they don’t view you as someone they can depend on. In either case, this puts a strain on relationships — you’ve damaged your credibility and reliability.

Research from Ohio State University’s Grant Donnelly found that “I don’t have time” is a bad way to decline a request. “It seems that because we think others should have more control over their time, we think they should be able to make time to do the things in life they really want to do,” writes Donnelly. “So we’re more likely to distrust the excuse that they don’t have time for us, and this ultimately impacts how close we feel to them.”

This is especially true in a world where people share their lives on social media. How valued would you feel if you’d invited a friend to a social function and she turned it down, “swamped”? Later, you see via social media that she’s out and about, clearly “swamped” with fun. You’re probably not upset because she’s doing something without you. It’s the fact that she lied to you and considered something else more valuable. It’s similar to that feeling of inviting someone to a party who makes it clear he’s coming only if something better doesn’t come along.

Being too busy shows you can’t “walk the talk.”

As a leader, you have to lead by example. If you’re constantly arriving late, you can’t get furious when co-workers do the same. In other words, you need to “walk the talk,” and this is also true with time management.

If you keep lamenting how little time you have — but expect others to make time for you — you’re failing to “walk the talk.” Not only does this prevent your teammates from trusting you, but it also may lead to resentment because they perceive you as a hypocrite. Leaders are often held to a higher standard, and your failure to manage your time may lead to a very real fear for your teammates: If you can’t get your stuff together, what hope do they have?

What You Can Say Instead of ‘I Don’t Have Time’

It’s just not possible to help everyone and accept every request that comes your way. There’s a lot of value in learning to say “no”: A failure to do so ensures you’ll always be putting other people’s priorities ahead of your own. That’s a surefire way to become a stressed and unproductive person.

However, there are ways to protect your time while being of assistance to others. If you’re legitimately swamped, be honest. Don’t use the phrase “I don’t have time.” Let the other person know you’re hard at work, finishing up a project to meet a deadline, or that you have an existing engagement. Offer a specific date or time when you could help.

If you’ve determined that you have no availability or aren’t the right person to help, suggest someone who may be able to. You don’t have to make this recommendation immediately — let him know that you can’t help, but you’ll get back to him with some names of people who have the skills or availability to move forward.

Finally, stop wasting your time with people who aren’t appreciative. If you have a teammate who asks for help but never returns the favor, you’re better off making time for someone who does. That may sound harsh, but it will keep you sane and encourage you to work with people who are grateful for your time and energy.

If you want to build and maintain your teammates’ trust, you need to stop using the “I don’t have time” excuse. Be transparent about your schedule, and offer alternatives. Even if you don’t feel you’ve contributed much, just five minutes of your time will go a long way with your colleagues.